Have you worked with them or are you going to try to work with them at any point?
No. Oh, I'd kill to work with them. I have to accept the fact that I'm 53 years old and my audience is getting older too and its one of those things. Sometime in my 40s I had a new girlfriend that saw me make the bluegrass record and she thought that's what I did I guess. Then we were put in a rock band together and making transcendental blues and the first gig we played at for not playing together for a year and a half was farm aid and it was a Crazy Horse year for Neil and we were really ridiculously loud and she goes, "Why do you play that loud?" and I go, "Because it makes my dick hard." And I still have that in me. I'm a lot of times too loud for my own audience. 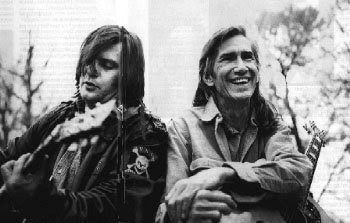 Addicted to these blog

The story so far